Salmon’s 12 Hours of Disco endurance mountain bike race attracted some serious endurance athletes. Don’t get me wrong, these were extremely nice people, but then again when you routinely run the risk of having a heart attack of losing other bodily functions in front of a crowd, it sort of makes sense to be nice, right?

My team — the Lost Riders — met our goal of not requiring the services of Salmon Search and Rescue at any point during or post-event.  We each completed two laps on the 8-mile track and were damned happy to do it. Other riders showed up with a little more ambitious agenda, however. If you look at this board… 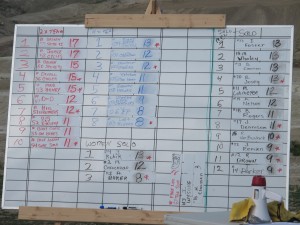 you might notice that the men and WOMEN solo riders completed 13 laps or approximately 104 miles from 7 a.m. til 7 p.m.

As admirable as this feat may be, the Enduroletes pay heavy costs.

For one, while the rest of us were enjoying freshly grilled cheeseburgers with extra relish, the more passionate pedalers substituted a substance known mostly as “goo” for solid food. They must call it goo because  “asthmatic dog slobber” is already spoken for.

you may need to question your life’s overall direction.

Some of the teams that came to Podunk to ride, like the illustrious MudHoneys, sported uniforms highly tattooed with sponsorships. But I saw no one with a major sponsorship from Gold Bond Medicated Powder or the like. You cannot tell me that, male or female, when you ride 104 miles on your mountain bike you have not permanently wrecked your nether regions. I won’t believe you.

One team showed us the upside to being serious riders when they set up their Ninkasi Brewing tent. In addition to the tent and team jerseys, the trio trucked in a keg each of Total Domination Double IPA and Radiant Ale. I asked how the Lost Riders might find a beverage sponsor (and not a salve or medicated powder sponsor). I was confused by the team captain’s answer and the close proximity of the icy cold brew, so I realized too late that he had said “You just need to pitch it,” and not “You just need a pitcher.” Oh well, I’ve made far worse mistakes…

7 thoughts on “Trolling for Sponsors”