The race — 12 Hours of Disco — indicated to me that we would have to ride our bikes for 12 hours which I considered to be a problem.

The Disco is for Discovery Hill, our local singletrack mecca — not the Donna Summer groove move, but even this kind of Disco is a problem. That is, if you are directionally challenged, like my friend and I are.

We get lost everytime.

I reminded her (we’ll call her Lucy for identity protection purposes) that we most likely couldn’t ride our bikes for 12 hours. Lucy and Max the Bike Guy, the race organizer, did some quick math and reported that if we signed up as a team, we would each only have to ride for 6 hours.

Last year we rode the Lemhi Valley Century Ride from the top of Gilmore Summit to Salmon.

The route is about 60 miles on Highway 28 and is theoretically all downhill. I reminded Lucy that took us about 5 hours and she fell off her bike. She touched the scar on her elbow and agreed that did happen. And, I reminisced, we stopped for a wine tasting and then had champagne before we made it to town. 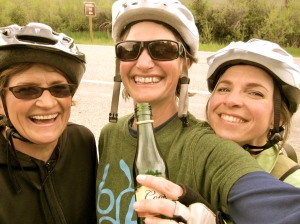 Max the Bike Guy insisted this was just the kind of training we would need for 12 Hours of Disco.

So now I’m on a team of 4, which by my math should have whittled my actual assigned cycling time to 3 hours, and we had our first training ride last Saturday — a swell idea given the race is May 19.

Two of my teammates — Lucy and Zephyr — showed up looking pretty perky. But K-Dog seemed a little green around the gills.

I was hoping no one would show up and I could sleep in the back of my car for a few hours, she admitted.

Apparently she had gotten home at 2 a.m. after taking part in the unfortunate invention of something called the Dooky Bomb. As described to us, the Dooky Bomb involves the dropping of a Baby Ruth candy bar into a shot of Dr. McGillicuddy’s cinnamon schnapps. We collectively groaned.

Lucy, Zephyr and I proceeded to get lost. We will most likely be assisted off the race course by Search and Rescue.

Next up: Team Shirts

3 thoughts on “Rising to the Disco Challenge”