Podunk’s premiere ladies hockey team, the Cold Muthas, accepted a challenge to play the Idaho Falls Icy Hots last night. I’m pleased to say that we were able to raise the victory flag with a convincing 4-3 win. The win was “convincing” because we were playing with a dirty goalie, a 14-year-old replacing her night’s babysitting wages with bribes from the crowd.

The refs were also supplementing their income at our expense.

The penalty called in this instance was “Too Many Muthas on the Ice.” Bogus.

The evening provided me with a few insights. One of the Icy Hots, a statuesque youngish woman, sprawled forward on the ice, and bawled. Like a baby. Three highly trained medical professionals helped her off the ice where she promptly went — not to the emergency room — but to the bench, waiting for her next shift. Now, I don’t know what kind of handbook the Icy Hots have, but the Muthas agreed that if you lay on the ice and bawl like a baby without a compound fracture, you are no Mutha. I’ve got a player with two artificial hips, for criminey sakes. There is no crying in hockey.

Of course our training regimen is probably tougher than our opponents since we are coached by adolescent females. This would be an example of chariot races, where the mean teenage girls force the Muthas to push the already heavy net around the ice while they perch on top of it. 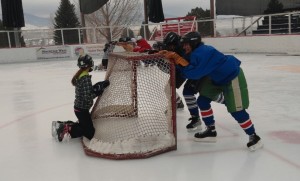 The Icy Hots do not train in this fashion. I could tell.

I’m not going to lie — I’m a little sore today. But I am questioning whether that was due to my performance on the ice or post-victory locker room shenanigans involving my sidekick Lucy (also known by her hockey name 2L Mutha) riding around on my back like I was her personal Shetland pony.

And I don’t think we ever came to resolution on the big question of the day, “Which is the better sports drink — chardonnay or cab?” Ideas?

3 thoughts on “Cold Muthas Rub Out the Icy Hots”