The Lemhi Valley Century Ride has become something of a family tradition. It’s the one time all year Her Royal Highness rides her bike and the only time I ride mine on pavement. For the past 2 years, we’ve ridden from Gilmore Summit to Salmon (about 100 kilometers –a metric century — thank you Canada) on mountain bikes.

Then Her Highness lined up a road bike. The allure of skinny tires was completely understandable. But by 9 p.m. the night before the ride, HRH hadn’t taken the loaned bike for a spin — a major problem considering she had never been on a 10-speed in her life. After a forced test ride, the road bike was forbidden under Section 47.2 of our family safety code.  Her Highness was back on fat tires.

Meanwhile, I had broken down and put skinny tires on my bike.

In other words, I had a chance to beat her to the finish line. My Lost Rider teammate Lucy and I smoked past Her Highness and her riding mate (astride a road bike) a few miles into the ride and put enough distance between the teenagers and us that we could no longer hear the wailing and they could no longer hear our evil laughter. 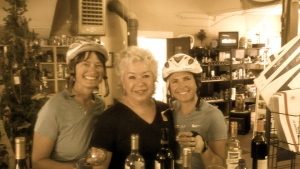 Fueled by our competitive spirits, Lucy and I made a pact to limit our wine tasting stop at the Lemhi Store (Mile 36) to one white and one red,  finding ourselves in complete agreement with postmistress and store proprietor June McKinney regarding the loveliness of the Bella Sera Pinot Grigio.

That’s when my plans started to fall apart. Somehow, while we were inside evaluating the merits of an Idaho merlot, Her Royal Highness was swindling an innocent passerby into letting her borrow a sleek road bike and schlep her mountain bike to Salmon. Unbelievable! 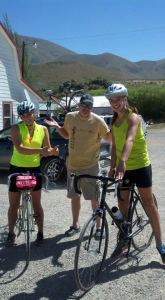 Her Royal Highness Hoodwinking Spectator Out of Skinny Tire Bike

The obstacles continued to mount. The Iron Chef and our son, the Odd Number, returned early from an All-Star baseball tourney in Eastern Idaho, and established a supplemental Negro Modelo and Salt and Vinegar potato chip aid station just after Mile 46.

After we’d made it over that hurdle, another one presented itself at Baker, Mile 55. Team Easy Rider joined the Lost Riders for the home stretch to Salmon. But first, they insisted we evaluate the pleasantness of icy cold vodka poured over ice and Paul Newman’s virgin lemonade. Did I mention it was a hot day? And the Easy Riders had ice?

With all this adversity, I failed to overtake Her Royal Highness. Next year, she’s mine.

2 thoughts on “A Century to Ride”