Havre, Montana is an 830-mile round trip from Podunk, so I thought I would go there for the weekend.

Besides, my kid was playing hockey there. So, aided by Snow-o-Rama 2014, I hit the road with two 9th grade boys — Odd and his buddy Goalie. Thanks to a technological mishap allegedly involving Her Royal Highness making off with my music infrastructure, I enjoyed listening to static on the radio and the chatter of adolescent boys. I won’t lie, some of what I heard was disturbing. For example:

We had a layover in Great Falls.

When we arrived at the hotel, staff were unloading piles and piles of luggage from a gigantic bus. The bags were too small for hockey players, too many for a rock band. Mannheim Steamroller? I guessed. But no, the front desk informed me this was part of their steady supply of Canadian tour buses.

What are they doing here? I wondered aloud.

“They are getting a break from the cold,” front desker told me.

Perhaps the Siberian cold, chilled with an arctic wind we encountered was unusual, I considered. 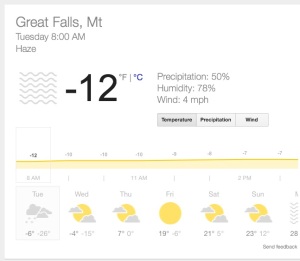 But no. So now I’m intrigued about what kind of deep freeze these poor Canadians escaped from. And if they think Great Falls is a nice getaway in the dead of winter, we just might have a new marketing angle for Podunk.

I’m not that great at ad copy, so these are early drafts, but I’m thinking….

“Podunk. 45 degrees north, but if you are in Canada, that’s really south, so you’re almost at the equator.”

“Visit the Salmon Riviera. Our winter temperatures are Fahrenheit.”

“Podunk. When your Canadian megaloads came through, we didn’t protest, just gawked. Tarsands are neat. See, we’re friendly, too.”

“Podunk. Take your tuque off and stay awhile.”

4 thoughts on “Havre, Here We Come”