For the duration of our relationship (not including grade school), the Iron Chef’s employment has required him to travel or otherwise be away from home for weeks at a time. As a result, I’m no MacGyver, but I’m reasonably handy. There are only a few household tasks that I routinely suck at, and they are, in no particular order: electrical repairs of any variety, cleaning the refrigerator, and getting the trash to the curb on trash day. 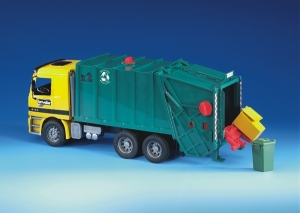 Today is trash day. I should say Thursday is trash day and our garbage man has been toying with what actually constitutes Thursday. The old garbage man believed in reasonable (but still early) pick-up of 7 or 8 a.m. And I’ll freely admit — I missed it then on a regular occasion when left to my own devices. Our new garbage man is working his way up to blowing past our house at one minute after midnight. I have to hand it to him. In a neighborhood that features wolves, coyotes, raccoons, and my dog the marauding Romeo, who wants to put their trash out to be ravished by wild things before dawn? His route is becoming increasingly speedy.

So knowing the Iron Chef returns today, I set my alarm for early a.m. so I didn’t look like the kind of woman who waits around for her spouse to get home and take out the trash. But it wasn’t my super early alarm that woke me up — it was the grinding sound of the garbage truck stopping at my neighbor’s house. Shit! I jumped out of bed, and knowing I had approximately 15 seconds before the refuse collector sped by my darkened house, I threw on the light switch and attempted an invented version of morse code. Flip-flip-flip (stop right now!), flip-flip (where are my f—ing pants), flip-flip-flip-flip (I only have 1 shoe), flip-flip-flip-flip-flip-flip (that garbage is too stinky to leave at my house!). Ignoring my desperate signaling, he drove by and stopped at my more compliant neighbor’s house about 100 yards up the road.  Now desperate, I didn’t care that I wasn’t wearing pants, or under halters, or shoes, or that I went to bed with wet hair. I ran into the street and waved my arms wildly. His tail lights moved up the hill at a rapid pace.

Unbelievable! I jumped in my car and Starsky and Hutched up the hill. As I pressed on the accelerator, I grew confident I would catch him because he had to give at least the appearance of tapping on his brakes in front of all the other sleeping neighbors’ houses. I wasn’t just doing this for me…vroom…I was doing it for all of us. When he slowed his top-heavy diesel to make the 90-degree turn about a half-mile from my house, I made my move, pulling in front of him and sliding to a diagonal stop. I got out of the vehicle in my scantily clad attire and my one flip-flop and approached the driver. His cigarette ember glowed in the darkness, and his window was halfway down. He really didn’t seem that surprised as I hollered my address and pointed down the hill.

“I was trying to get your attention,” I yelled over the engine.

“It’s hard to see anyone when it’s this dark,” he yelled back.  Touche.

Now that I’m up so early, maybe I’ll tinker with something electrical…