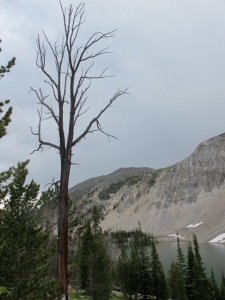 The Salmon-Challis is home to the Lemhi, Salmon River and Beaverhead Mountains with gorgeous alpine lakes, streams, and views unparalleled. But there is a cultural aversion to telling anyone about it.

So one has to have a keen sense of direction (which I don’t) or be willing to take chances (which I am). As part of my eternal quest to make the trip to-and-from Idaho Falls bearable, I finally made it to Meadow Lake. About 65 miles from Salmon, Meadow Lake is reportedly the highest alpine lake in Idaho you can reach by car. It’s at 9200′ and the drive is an easy 5 or 6 miles from Highway 28. Bonus.

My traveling companion and 13-year-old son, the Odd Number, reluctantly agreed to check out the hiking trail at the end of the lake. This trail had a very helpful sign that read “Foot Traffic Only.” Even though the Salmon-Challis did not want to let me know where it went, the trail was beautifully maintained — wide and smooth with real-live bridges that crossed the unnamed creeks — and definitely led SOMEWHERE. They went to the trouble of placing nice overlooky benches along the trail.

The trouble is, the Odd Number is not a big fan of hiking. So if my gamble that we were on a loop trail did not pay off, I was going to have some serious explaining to do and an incredibly cranky hiking partner. This would be hard for me to take after traveling from Mud Lake and through the Idaho National Laboratory botanical garden on Highway 28. But I saw a fork in the trail and a sign in the distance so I knew I could clear this matter up in a hurry.

When we arrived at the fork, the sign that pointed up the hill read “Divide.” No mileage, no further explanation and no mention of where the trail that we were on went. Let’s see, it didn’t seem like in 20 minutes we’d hiked far enough to be near the town of Divide, Montana. And I was fairly certain we were on the wrong side of the Lemhi Valley to be heading toward the Continental Divide Trail.

We took the low road and ended up on the other side of the campground. I went home and looked at my Eastern Idaho Trail guide and discovered that we were on the handicapped-accessible 1-mile Meadow Lake campground trail. But, shhh, don’t tell anyone.

2 thoughts on “Tell Me Where to Go”